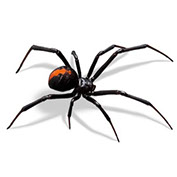 The number one attractant for spiders is a food source, namely insects. By reducing the number of flies and other insects around your property you will reduce the spider population. Removing refuse around the outside of the home such as leaf piles and debris will reduce the population. A regular pest control regimen for existing insect problems will keep the spider population down as well.

Since spiders are a secondary insect, (they feed on the other insects) the best way to control them is to control their food source.  A large spider population is due to a large population of some other kind of pest, be it caddisflies, mites, or midges.

Certain species of spiders take advantage of the numerous harbourage areas on the outside of buildings to construct their webs, particularly buildings along lake shores or river banks which often attract vast numbers of flying insects. The spiders take advantage of this source of prey and can generate a vast web network as they and their offspring compete for best locations. Boats docked at marinas are also prone to heavy spider infestations. A heavy duty vacuum cleaner with a crevice attachment can be used to remove spiders and webbing from around eaves, window frames and along the edges of siding panels. This action may control the problem on a short term basis without the use of pesticides. The use of a high pressure water jet may also be an alternative in certain situations. Regular vacuuming, especially in corners and dark cool areas of the home will reduce the indoor spider population, since this is where they prefer to live. Outdoors, a scheduled pest management approach will keep the population down.

For more information about spider control or to schedule a peace of mind inspection for your home, contact Pest Value.

uses unmarked vehicles for your discretion. Pest Xpress is a proud member of the Trent Hills Chamber of Commerce.